A running buddy of mine loves to remind me of something another friend once said. “That was not one of your brighter moves, Steph, and let’s face it, you’ve done some stupid things.” It’s true, I know. Running with Scissors was not an idle choice.

So when I volunteered to help on a prescribed burn at Penny’s Bend Nature Preserve two days before the Blue Ridge Marathon, I did hesitate for a second. Nowhere in the running literature does it say “Two days before your race, strap 5 gallons of water on your back, grab a fire rake and a drip torch, and spend the day setting the woods on fire.”

Although prescribed burning is not the same as fighting wildfires, there is a lot of prep work involved. Here’s some of our equipment.

The NC Botanical Garden is using fire at Penny’s Bend Nature Preserve to restore the more open forest that they think was here historically.

Yeah, BUT. I only get the chance to help with fires once or twice a year, and I was not about to miss out. And, for anyone who has visions of extreme smoke-jumpers, this was not that. Prescribed burning takes a lot of meticulous planning and safety training for the burn boss, but it’s really child’s play for a bunch of volunteers who were pyros as kids. Fortunately someone took the water backpack from me (it’s only ~25 lbs full, but sloshes around awkwardly and the straps are too wide for my shoulders), and I spent most of my time on drip torch duty, lighting fires one small unit at a time, which is my favorite job. It was a beautiful day, and we burned one unit at a time, mostly as planned. My shoulders are a little sore and I probably need to spend today re-hydrating. 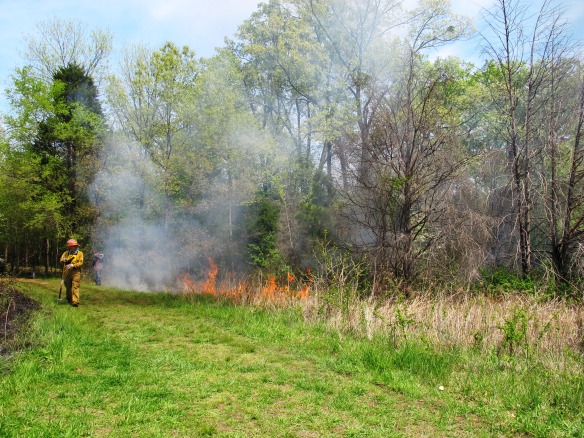 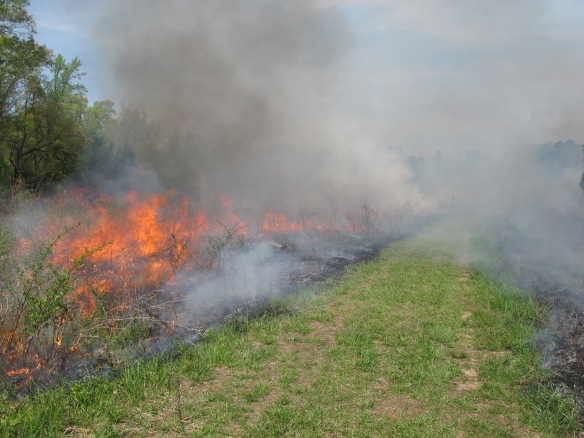