My favorite class to teach at the NC Botanical Garden is Dendrology: Trees of NC. It is known as one of the hardest class in the Native Plant Studies Certificate Program, yet I never have trouble filling the elective class, and I’ve never had a student fail.

I teach the course the same way I learned dendrology at NC State. Each week Richard Braham took us out in the woods and taught us 12-15 new species of trees. We were responsible for the scientific name, common name, family name, and the answer to a random natural history question. Dr. Braham quizzed us on 10 trees each week. Spelling had to be perfect, and quizzes were cumulative—any tree we’d seen thus far was fair game.

I love teaching dendro because I remember how hard it was, and I like finding ways to make the trees easier to learn. My mini-course is 4 classes, so I only cover about 50 trees. But it’s still hard to remember them all. The growing sense of accomplishment that accompanies each student’s mastery is incredibly rewarding to witness.

My students know that I have some favorite trees. American beech (Fagus grandifolia) is one of them. I love the smooth, gray bark, the singular bright green of new leaves, and the quiet winter woods where they stand out with their tan leaves. In the North Carolina Piedmont, I look for beeches on north-facing bluffs, which stay cooler and moister in the hot summers. In the mountains, Elk Knob (Hike #26 in our book) has forests that are 100% beech.

In the fall and winter, beech is easily recognized by the dry, tan leaves that remain on its branches. I noticed that they disappear somewhat suddenly in spring, displaced by the new green leaves shooting out of the long buds. I decided to take a daily photograph to document the leafing-out of one of my favorite trees and help me observe the coming of spring. 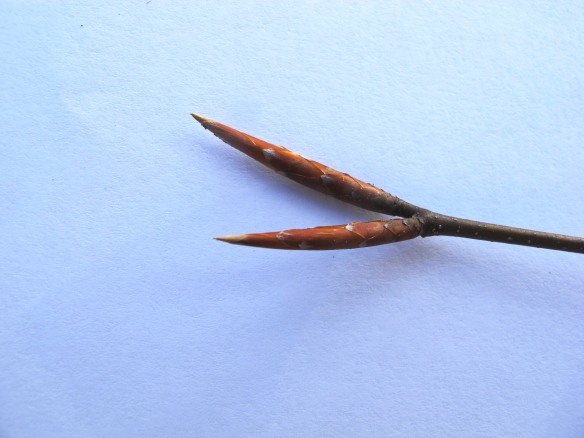 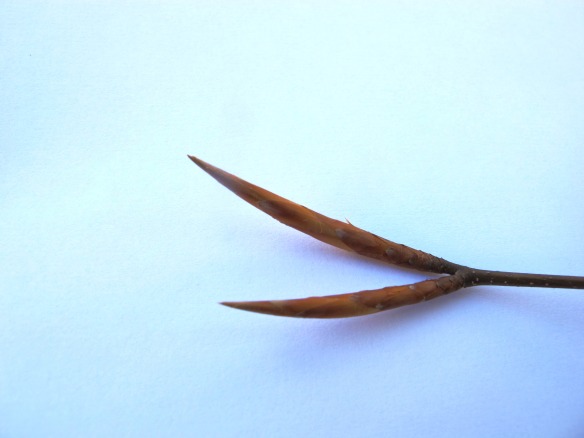 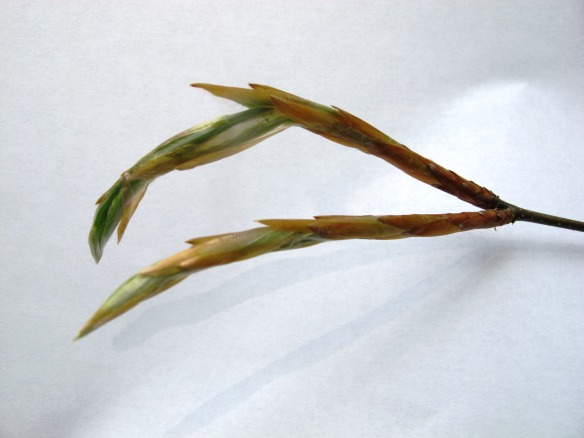 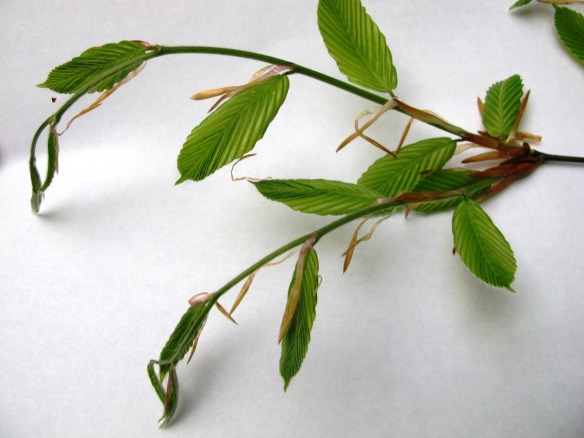 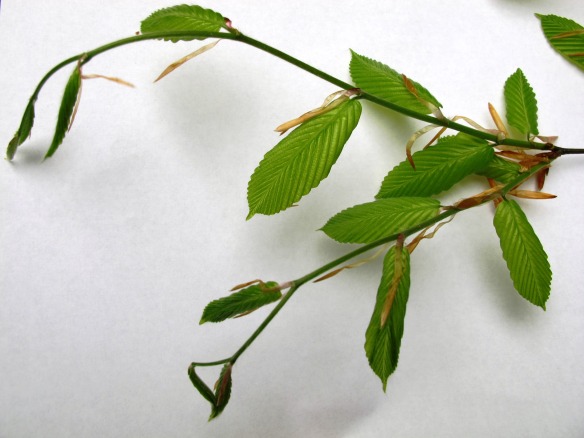 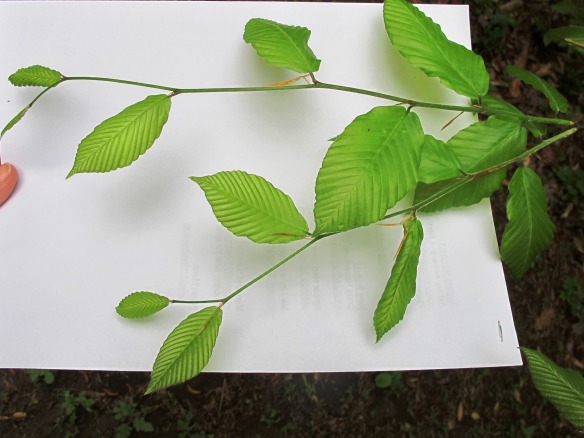 Eight leaves packed into each one of those small buds. It’s amazing what you can see when you look!

About a month ago, my friends Joanna and Ken joined me on a day trip to Linville Gorge. I had taken the day off, but was there because of my forest ecologist’s insatiable curiosity about the outcome of the Table Rock fire. I had also promised NC State a blog post about the November fire. So technically, I was doing research.

I had to see what the mountain looked like after this! Photo by Mark Steven Houser.

[I have the best job in the world!]

Joanna and Ken are both running buddies, and we packed and dressed for running. I didn’t promise much running, because this was Linville Gorge. But we were ready either way.

Linville Gorge is a wild place. It covers nearly 12,000 acres, with sides so steep that loggers couldn’t reach the timber. It remains one of the very last tracts of old-growth forests in the East. In my book, I talk about the human need for wilderness, a place that demands our respect and recognition that we are but a tiny part of a bigger world.

Therefore, in addition to my usual hydration pack and assorted snacks (new favorite: wasabi soy almonds! Salt + a wallop!), I also packed a small first aid kit, a topo map, and a compass. As a federal wilderness, Linville Gorge has no signs or trail blazes. Cell service is non-existent. You better know the trails or know how to read a map, or better yet, both. I knew some of the trails and knew the route I wanted to take—we’d just have to see if we could connect them together.

Map that shows our route: Table Rock, Little Table Rock, Spence Ridge to the Linville River, back to the road, up to MST, back to Table Rock Picnic Area. Notes: 1) About 8 miles, 2) Bridge (the only one across) was washed out, 3) Yes, many topo lines.

First, we hiked to the Table Rock summit, easily the most popular trail in the Gorge. I wasn’t surprised that the fire damage was patchy, but it was even spottier than I expected. Here and there we could see swaths where the fire burned hot, but there were large patches of completely intact forest and many places where the shrubs had burned but the trees had escaped unscathed.

I love edges. Photo by @jpomilio.

It was Monday, so we had the summit to ourselves. I ran along the broad ridgeline, looking for the federally endangered mountain golden heather (I didn’t find any). The summit was unburned and the views up the Gorge were spectacular.

Far below us, we could see the glint of sunlight on water, the formidable Linville River, which created the vast gorge. That’s where we were going. It’s nearly a 2000 ft. descent from the summit to the river, not counting all the ups and downs in between.

You can just see the Linville River from the Table Rock summit. 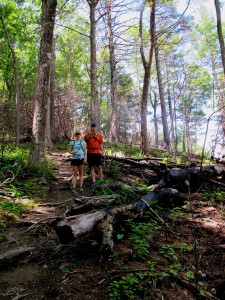 Sure hope this is Little Table Rock Trail, because I don’t want to have to come back this way!

We descended past the junction for the Mountains-to-Sea Trail, then I stopped at another small trail that turned north. “This should be the Little Table Rock Trail,” I said, hoping it was.

We descended steeply, falling down the side of the mountain. The trail was rated “very primitive” and “most difficult” and the footpath faded in places. This area was burned more thoroughly than the trail up to Table Rock. Most of the rhododendrons and azaleas were blackened, though green shoots were already sprouting at their bases. I found big patches of Indian cucumber root, dug one up, and fed it to my friends for the full wilderness experience. 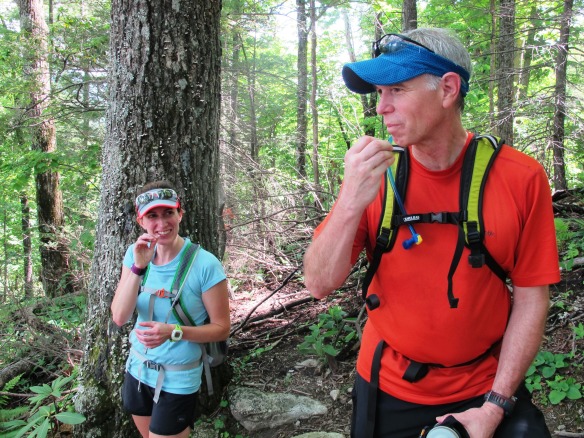 Joanna is watching to see if Ken is going to go into convulsions from eating Indian cucumber root. They agreed it was pretty tasty, but you’d have to eat a lot to survive. Fortunately, we packed lunch.

With the fire, there were more downed trees than usual, obscuring the trail in places. We emerged at large, flat camping area, which had a network of smaller trails leading away plus one main trail. I pulled out the topo map as we ate lunch, and figured we must have reached the intersection of Little Table Rock and Spence Ridge Trails. I decided the main trail heading to the right must be the upper part of Spence Ridge that led to the road, so we needed to find the continuation of Spence Ridge that led to the river.

If you look at Joanna’s Garmin track, our path looked a bit like a spider—going out on something that looked promising, then back to the campsite as we realized it wasn’t. Sometimes the path was distinct, only to end at a cliff or an impenetrable thicket. After an hour, we decided to take the main trail out to the road and drop our plans to go to the river. I was disappointed but out of ideas. Not five minutes after we turned right, we reached the obvious intersection with Spence Ridge (unmarked, of course). Huzzah! We turned left and ran the moderate slope down to the Linville River.

The river was quiet, but the enormous tumbled boulders and sizable bridge that had vanished hinted that this serene waterway can turn into a raging torrent with a single afternoon thunderstorm. We stretched out on the rocks, took off our shoes and soaked our feet in the cool river.

Don’t let the tranquility fool you–the Linville River is both a wild and scenic river. The only bridge that spans the river was washed out.

It was well after noon, so we reluctantly laced up and began the hike out. We ran when the grades weren’t too steep. When we reached the road, we turned right and ran about a mile before jumping on the (marked!) white-blazed Mountains-to-Sea Trail to head back to Table Rock. I wasn’t entirely sure how far it was, so I was relieved to see the sign that said we were just two miles from the car.

The only reasonable part of the MST that we hiked that day.

Our initial climb through open forest abruptly became slick, rooty, and incredibly steep. Joanna disappeared ahead while Ken and I slogged upslope, pausing at intervals to catch our breaths. At one point, we passed an old logging deck campsite, which was the first place I ever camped in my life, in college, many years ago. If the trail we took from there to Table Rock—now the MST—is the one we used to haze newbies, by hiking close to midnight without headlamps, it’s a miracle I survived to return.

We finally re-joined the Table Rock Trail and took the more established trail back to the car, arriving around 4:00 pm. We walked around the picnic area where the fire started, then hit the bumpy dirt road down the mountain.

Great friends and end to a wonderful day!

I love wilderness and the bare essentials it leaves you with, but technology has its advantages—we were able to locate the Olde Hickory Taproom, for burgers and beers before heading east. Ken even ordered the Table Rock Pale Ale, while Joanna and I opted for the Daniel Boone IPA (yum!).

At one point during the day, Ken asked if there was anything like Linville Gorge. I thought for a minute, then shook my head. No. Not on the East Coast. I have many favorite wild places in the southern Appalachians, but none are like Linville Gorge. Somehow we’d climbed one of the highest peaks and descended to the river and yet, only scratched the surface of this wild and beautiful place.