I WON A RACE! First female! Woo hooooo! The end.

OK, two weeks later I am still SO! EXCITED! Because I’ve never won a race before! Not a big race, not a fast race, although it was a gnarly race. It’s on Ultrasignup, so it’s legit!

I went into the inaugural URE Marathon with curiosity rather than expectations. I signed up because I wasn’t running the Umstead Marathon and I wanted an excuse to check out the Uwharrie 100K/100Mile course, which is 3 or 5 loops that are described as “Simply Unrelenting.” Was the figure 8 loop harder than the Uwharrie Mountain Run (UMR) on the Uwharrie Trail? I had to find out.

I haven’t followed a training plan since last spring and was surprised to run better than expected at Uwharrie 20. Then I pulled off my point-to-point marathon (aka the “No Steph, That Does Not Sound Like Fun” Marathon), running from Creedmor Rd. to the Falls Lake Dam on the MST one Saturday with my buddy John (I placed 2nd out of 2). I found myself at the starting line with a good base, though undertrained for hills (a discovery made at UMR).

Brandy and I talked Megan into signing up with us and we drove 2 hours to the start (which I now know is Mile 20 on the UMR). They had both done the Umstead Marathon the week before, so they were planning a fun and easy day in the woods, with their primary focus on a post-run brewery stop in Asheboro. Clearly I need to spend more time around these fun adventure peeps!

The race was set up as a free Fat Ass style, so everyone contributed snacks for the aid stations, which were divvied up and distributed by wonderful volunteers. After a quick race briefing, we started with a 5.7 mile out-and-back on a dirt road before jumping onto the 20.5 mi single-track loop. I ran easy, but noticed that there were only 2 women ahead of me when we started the single track. After a couple miles, I caught up with Jenna—I recognized her face and her name immediately, since we’ve done many of the same races, but had never put them together. She’s had a big early season with some ultra-distance races and had run Umstead last weekend. She’d run the course before, so she gave me some idea that the nice easy running we were doing at the moment was not going to last. 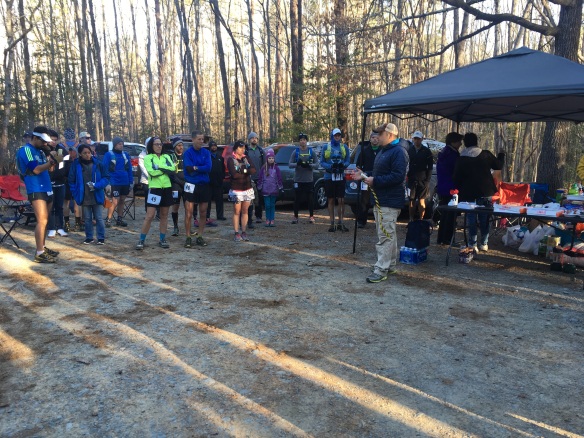 I’d never been on Dutchman’s Creek before, so I was curious about the terrain.
As many friends had promised, the first part was super-runnable, so I cruised along. There were many Scout groups out on the trail and I ran into the first one while slogging up the first big hill, with a slope far steeper than the opening mile of the Uwharrie Mountain Run. They generously allowed me to pass as they carried their heavy, external frame packs. One scout had a ginormous cookpot banging against the outside of his pack, which dwarfed his young frame.

I followed a young woman who was running strong and easy for several miles before closing the gap and introducing myself. Her name was Emily and we chatted for a few minutes. She comes from a triathlon background and had recently gotten into trail running—yeah! She trains with the RWB team near Clayton. We had a chance to talk more after the race and planned to meet up in Umstead for some training.

I was just wishing I’d paid better attention to where the aid stations were located when I came upon the one at the intersection of the two loops, mile almost-12. Clearly I did not stay there long enough, because for the rest of the race I had to listen to other runners rave about the bacon-wrapped pickles, which had vanished by the time I came back through.

I kept thinking that with each foot of elevation loss, I would pay on the return journey of potential energy gain. [Happily, I couldn’t remember the exact equation.] The URE Marathon promises a brutal 4200 ft of elevation gain. Soon I stopped at a clearing where the path was not altogether clear. Two hikers were there and called, “look up to the right.” I looked up—as in, I had to tilt my head back—and saw the yellow flagging above my head on what looked like a pile of rocks (the “confidence markers” yellow flagging were exactly as described and much appreciated—seems like I saw one every time I started thinking, “geez, I sure hope I’m still on the right track.” Thank you organizers!). A sign informed me that I had reached the famous Sasquatch Summit. It did not disappoint—a hands-on-knees slog, including a few places where I used my arms to pull myself up.

This dead mouse on Sasquatch Summit may have been trying to tell me something.

Not long after that, I saw a sign for the Soul Crusher. It seemed pretty tame at first, until it WASN’T. It went on and on, up and up. The only reason my soul wasn’t completely crushed was knowing that I would not have to run it again.

Because here’s the thing—I was running one loop of this gnarly course today and thinking about what it would be like to run 3 (100K) or 5 (100 mi) of them in October. How in the world would you navigate the course in the dark, and how would you keep yourself moving forward on these brutal loops? There were quite a few Uwharrie 100K/100 mi veterans running, so I asked them. Allen said that the toughest mental decision is whether to stop at 100K, knowing you were finished and not have to run TWO MORE LOOPS (40+ miles) to finish the 100 miles.

I don’t know. During the race, there was not a moment when I thought, “gosh, I could totally see running this course all day and night!” But now that the race is over…maybe it’s doable. Maybe? The nighttime adventure would be something to remember!

At some point Kris from North Augusta caught up to me but declined to pass, though I offered several times. He hadn’t run Uwharrie before so we had a great time talking about trail running and racing as we trucked along.

Kris and I made the left turn onto the Uwharrie Trail. On the Uwharrie 20, that point would be around 12 miles—here, it was close to mile 17. Five miles makes a difference in Uwharrie, although this section isn’t bad. We ran out to mile 17.4 and Kelly’s Kitchen, where I knew my friend Juliet was volunteering. It was great to see her and Jeannie (both ultra-women extraordinaire!). We chatted for a few minutes about the prescribed burn that had been done recently (no, it wasn’t me) and the Uwharrie cookies I brought. Then she said, “you know you’re first female, right?” and I think I said, “Aaaah! No pressure!” I didn’t want Emily to catch me stuffing my face at an aid station, so I grabbed a pb&j and headed back down the trail.

Perusing the PB&Js at Kelly’s Kitchen. [After seeing this photo, I cut the Wacky Professor Hair back into submission.]

The half mile out-and-back gave us a chance to high-five a few folks. Just 9 miles to go. Now it seemed like a disadvantage to know the course—miles 11-14 on the Uwharrie 20 weren’t bad, but 14-17 are brutal. I told Kris that we had a big climb coming up but the rest wasn’t too bad. He bought it.

Dennis Mountain at mile 22 (instead of 16) was not awesome. But the next section wasn’t as hard as it usually is on the UMR because we only had 1-way traffic. We reached a sign that said we had a mile to go. Before the race, I’d looked at my Uwharrie pacing and, although I didn’t know all of this course, I thought that if I had an amazing day, I might squeak in under 5 hours. My watch said 4:56. “hey Kris, if you can pull off a 4 minute mile, you can break 5 hours. You should totally go for it. I’ll be right behind you.”

“You didn’t tell me that the last part of the race is another climb,” said Kris, no longer buying my marketing. “I wanted to keep it a surprise. Where is that finish line???” There it was, and there were lots of smiles and “good jobs.” We finished in 5:09! First female! I was thrilled!

I spent the next little while hanging out in a chair, making frequent trips to the snack tables, enjoying the beautiful day, and cheering in fellow trail runners. Brandy, Megan and I then headed to the Asheboro brewery with Aline and a few others, where we ordered a large, plain pizza, got a pepperoni, shrugged and wolfed down the whole thing.

Dan Paige’s URE Marathon site promises, “…if you are looking for a race over some gnarly trails with some good people, this might just be what you are looking for.” Delivered. What a fantastic race, great volunteers, and top-notch organization and direction. If you think that the only thing better than Uwharrie is More Uwharrie, this race might be for you!

Awesome Peep volunteers Juliet and Aline! Also 2 State students recognized me at the finish with the help of my shirt, though they claimed they were not in my class.